My friends over at SixFourThree*, “a blog about baseball and much more”, posted an entry today that discusses the somewhat counterintuitive recent trend of rebuilding baseball stadiums that contain a smaller – rather than larger – amount of seats.

The author of this particular post correctly points out that the main reasons behind this change are:

1. Aesthetic. Fewer available tickets increases the likelihood of a (near) sellout game, leaving fewer empty seats for the TV audience to see, improving the perception of team success and fan loyalty.

2. Economic. If the supply of tickets available decreases, demand then increases proportionally. This allows for the market value of tickets to increase.

I think there’s an unintended humanistic result that musn’t be overlooked in this discussion and I’ve provided my thoughts below: 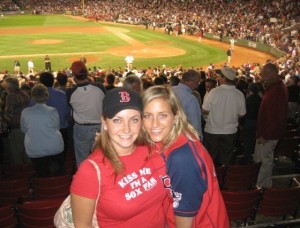 Ignore my shirt and instead look at how close we are!

Growing up a Red Sox fan, with Fenway Park as my home stadium, I think I’ve experienced baseball differently than baseball fans in other cities.

Fenway produces an intimate, community feel because of its small size. This was something I took for granted until I attended a Red Sox- Orioles game at Camden Yards during college – my first baseball experience outside of Boston.

I remember being hugely disappointed by the impersonal feel of the game there. Tickets were very easy to obtain and pretty inexpensive but the enormity of the stadium and the crowd itself made me feel like just another attendee.

Clearly, part of it is my obvious bias, but again, I think Fenway is physically so small that not only you are forced to become friends with your seat neighbors but also you go in knowing that even the worst seat isn’t that far away from the action and the players on the field.

I recently was exploring seat options at Nationals Park for the Red Sox games taking place there this summer. What I noticed was that there were definitely more seat options than at Fenway but a $50 ticket gives you a much better seat in Boston than does in DC.

I guess what I’m trying to say is that, of course, smaller stadiums are being built first and foremost to maximize a franchise’s earning potential, but there is a positive outcome that shouldn’t be overlooked – the betterment of the game experience from a fan’s perspective.

*The phrasing of “my friends at SixFourThree” is a bit funny to me because “my friends at…” is a statement that is used in a general, vague sense, but, in this case, the writers of SixFourThree really are my college friends who happen to run a sports blog. Oh, grammatical humor! Gets me every time!