In my last post, Struggling with Facebook Statuses, I outlined my frustration with the lack of control over Facebook’s status updates.

Never one to complain without providing suggestions on how to alleviate the problem, I’d like to outline two proposed solutions that would allow a Facebook user to better control, and consequently, better leverage the Facebook status feature which has, for better or for worse, become a primary focus of the site with the latest redesign.

1. ABILITY TO CONTROL PRIVACY SETTINGS FOR EACH STATUS UPDATE

When creating a Facebook Photo Album, one of the prompts asks the user “Who can see this?”. The default answer is set to “Everyone”, but this setting can be changed as needed. (Side note: “Everyone” denotes “everyone authorized to see my profile” not “Everyone on Facebook”.)

Facebook could do the same for status updates. Unless otherwise specified, status updates would be seen by “Everyone”, but for more sensitive status updates, the privacy setting could be changed to include just a subset of viewers. Most casual users wouldn’t bother changing the setting, but for power users, there would be an added level of control.

(I would also argue that for both Status Updates and Photo Albums, a user should be able to set a default answer that may not necessarily be “Everyone”.) 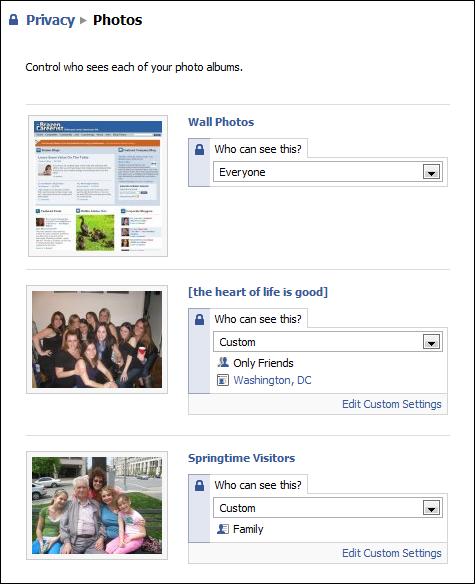 As it currently stands, the ability to restrict who sees Status Updates and who sees Links is controled by a single function. I believe the two should be two separate privacy functions. Firstly, Links are their own distict feature of the site, just like Notes and Photos and Events, all of which have their own privacy controls. Secondly, the reason I’d like to find a way to open up my Status Updates to more people is so that I can increase the reach of whatever information I’m trying to share.

If Status Updates and Links were separate, I would keep Status Updates fairly restricted for the majority of my profile visitors. Links, on the other hand, would be viewable by everyone. I would use Links to raise awareness of — and recruit particants for — things like upcoming events. And Status Updates would remain literal, and sometimes scary, answers of “What’s on your mind?”. 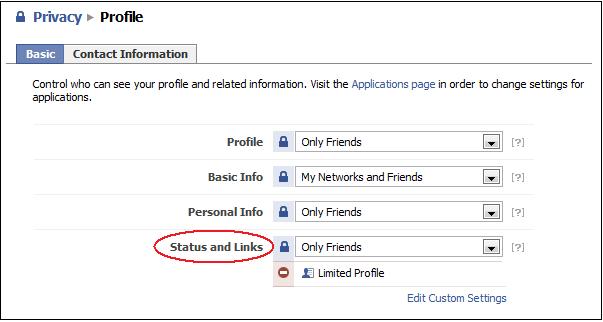 Currently, Facebook Status Updates and Links are controled by a single setting