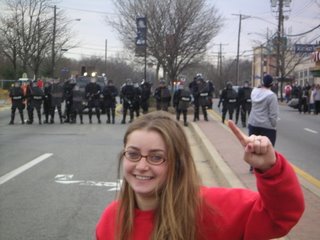 So, here’s the deal boys and girls, apparently, if Julie can’t go to the riots, the riots come to Julie.

The past week has been full of political talk (although, when is it not??)… The french government passed the CPE which says that young people – those under 26 – can be fired, without any reason, for up to two years into their employment. Understandably, this has the “young” french pissed.

Now, I don’t really know where I stand. I’m usually very liberal… so I should support the students by default. Here’s the thing, the right says that this law won’t actually change anything because there are so many costs involved with firing someone and finding another employee able to do the job. But then, why make a law that is not going to do anything? If you’d like more info about this whole thing, here’s a news article in english. 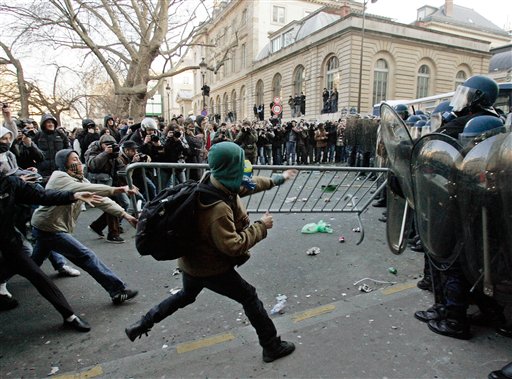 My other little point, is that although maybe rioting isn’t the best way to prove your point, at least the young french people are doing something about the fact that they are pissed off! I think what’s going on back at home is completely insupportable (unacceptable?). I know that there are many others that feel the same way. So why are we sitting idly by?

The sorbonne has been closed for the past couple days. First there was a sit-in, which the police broke up, using force… then, the government decided to close the institute for reasons of security.

Tuesday night when Lesley and I were heading out, there was tear-gas in the metro station, from which my throat is still irritated. Some metro stops are closed. There have been demonstratoins yesterday and today, and a big one will take place Saturday (but I’ll be in DUBLIN for St. Patty’s day!) We walked by a demonstration yesterday and it was indeed police with riot gear standing ready for the students to pounce – but they were sitting/standing peacefully around, chatting among themselves…