How are you all? I hope you all had the BEST spring breaks!

Last time I wrote, I was getting excited for London trip, and it really was so much fun. I met up with Laura, Avery, Mindy (and had lunch with Jackie!)… Friday night we went to London’s Absolut Ice Bar, where everything – the cups, the walls, the actual bar – is made out of ice. We wore Eskimo suits and took an absurd amount of pictures… 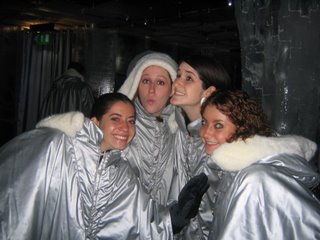 We saw the changing of the guards at Buckingham Palace, had a traditional English lunch (fish and chips) at a local London pub, watched Les Miserables in London’s West End (like Broadway), rode the London Eye (the world’s largest observatory wheel – basically a huge Ferris wheel – where you could see all of London) and took a boat down the Thames. Other sightseeing included Westminster Abbey, Trafalgar Square, the Tower Bridge and the Tower of London. I would say my favorite sight in London is Big Ben which, for me, really symbolizes London. It was crazy fun running all around London with some of my best friends from Maryland!

Last weekend, I went to Strasbourg with my program. We visited the Strasbourg Cathedral, they tried sauerkraut with sausage, and we sampled flavored beer and regional wines. On Saturday 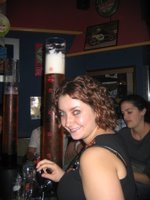 night, we went out to a bar and ordered giraffes, which are a mix between bongs and kegs… they resemble huge test tubes and hold about 10 beers… Good times…

What to say about Paris that I haven’t said before? The city is becoming more and more beautiful every day and I’m enjoying every moment here. This is actually the first weekend in about a month that I haven’t been travelling, and in the past couple days, because it’s finally warm-ish out, I’ve been walking all over this city, exploring its many streets and sights… They say there’s nothing like April in Paris, and I’d have to agree!

The hardest thing here is the fact that I live far from all of my friends and my classes, and my roommate and I usually do our own things… However, I’ve solved this problem by sleeping out. I’m so thankful to my friends who let me crash! We go out pretty much every night, and the thing that I love is that every night is different. You never know who you are going to meet, what crazy adventures you’ll encounter….

An example: A couple weeks ago, as I was waiting for the night bus (like the circuit) with John and Jeff, a guy asked to use John’s cell phone. John’s a nice kid and gave him the cell phone. The guy takes off running with it! John, who’s drunk, tries to run after him, but trips and fells TWICE in the middle of the street. Jeff, who loves fighting, takes off also. What choice do I have? I take off after all three of them, and am about to call the police as soon as I can figure out where they went. I’m running down the street and I see the guy coming towards me. I hold out my hands and tell him to stop. I tell him to give me the cell phone…. and he does! Ha! The guys hate that story because I saved the day, without any fighting involved. Who knows why he gave me the phone? I was just glad no one was hurt…

I’m trying to experience every moment to the fullest, as cheesy as that sounds… No regrets… I can’t even describe how incredible being abroad is!

I miss you all so much… Keep me updated… I want to know how things are going in your lives….

Also, Spring Break for me started on Friday afternoon and I’m leaving tomorrow for Lisbon. I’m also going to Madrid and Barcelona. I’ve never been to Portugal or Spain and I can’t even explain how excited I am!