I’ve been avoiding posting because posting means dealing with my feelings. In the span of a week I’ve gone from overwhelmed to overworked to devastated to relieved to nervous to… You get the idea.

First off, on December 9th I found out that the American Business School had changed its course offerings. In order for me to stay on track for graduation, I need to get credit for three, yes, just three, classes next semester. I big reason why I chose Paris over Grenoble was because I thought that I would be able to get those credits. Well, now it looks like I will only be able to get credit for two classes. 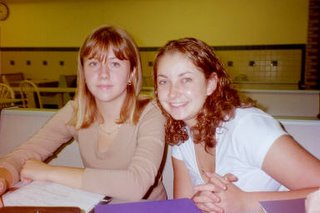 Now, my finals basically started December 13th, and I had already been dealing with study abroad issues for the past two months, plus I was leaving College Park in a week, I had my mother breathing down my back to figure out where I was going to store my things while I was abroad, AND I had to pack and ship the things I needed to bring home… So as you may imagine, I wasn’t quite focused on figuring out the credit situation. Instead I was hard at work and hard at play. (That’s me, with the curly hair, in 2001 – “hard at work”).

I figured out the storage situation… My big sister, Karen, was kind enough to let me store some boxes in her basement. 🙂 It was hard to part with my picture frames, my sorority paddles, my favorite mug…

The worst part of the end of the semester was definitely saying bye to my best friends. There are people that I have been friends with since freshman year, who know me better than anyone, others are friends I’ve met along the way and have become even closer to this semester, and then there are those people that I would have never expected to become friendly with, but did this semester, and I can’t imagine life without them.

It’s hard at times, being in a large group of friends, and being in a sorority, in both, you get lost at times. 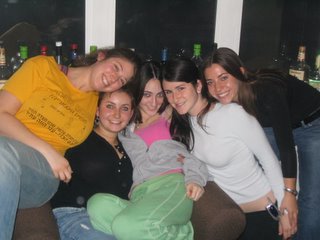 The point of the story is that saying bye was really hard to do because these people have become my family at some point during the past two and a half years. (That’s me, with four of my best friends, taken on December 18th). Especially the day that I life – the last three people I said goodbye to are my three closest friends at school. I spent the car ride to the airport crying.

So… Then I’m home, and I’m sad to be without my friends. My mom starts getting on my case about what to do about credits and everything kind of blows up. She’s furious that ABS has changed their courses, she’s furious that CEA let it happen, she’s furious that I didn’t get everything figure out sooner. She’s on the phone with everyone and she has me freaking out. I got home last Wednesday and since then my life has been consumed with figuring out this credit crisis.

One of the solutions we’ve come up with is for me to do an independent study, but between you and me, I don’t want to do it. I’m sure it’s not going to be fun, it’s probably going to be a lot of work and I’m not going to meet any people (as I would if I were enrolled in a normal-sized class). Grr.

Anyway, I think I need to talk to my mom because her pressuring me to figure something out is only making me really stressed out and nervous about going. I need her to calm down. Or something.