Classes ended on Tuesday and I have finals tomorrow and Saturday… so obviously I decided the best use of my time would be to send you all another update 🙂 This is another long e-mail, so here’s the link to the pictures. They are on facebook, but you don’t need to be a member to see them.

Speaking of finals, the french system is really silly, in my opinion. When they write exams, the goal is that you will be able to fill in about half the answer, not that you will be able to answer everything correctly. In other words, a 100% is not the the thing to strive for, a 50% is! Tomorrow I have an oral exam where I have to read aloud a text and answer then answer questions in an interview format… in French. On Saturday, my exam, which apparently makes up 70% of my 10-credit class grade, is scheduled to take three hours.

There’s a part that has grammar, but it’s not grammar you can study for. They can ask “what’s the noun form of clear?” (clarity). WTF? Then there’s this thing called a dictee that they loved to do. The teacher reads a text and you have to write it down without ANY mistakes. That means all the accents have to be there, every letter of every word… it’s out of 20 points and every time you make a mistake, that’s another .5 off… The last section is a “resume”, where the teacher reads a text of let’s say, 30 lines and you have to sum it all up in 10 lines. Again, all of this IN FRENCH. Ugh. 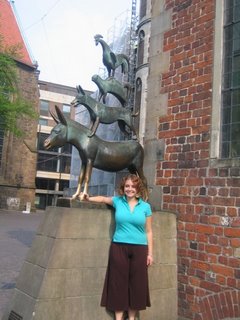 Anyway, let’s start from the beginning… I got back from Spring Break and the next weekend I was off again. This time to Perigord, a region in the middle of France, known for its foie gras. I did try it, but I didn’t think it was anything special. We went to the Lascaux caves, which have ancient cave drawings, and to a chateau formerly owned by Josephine Baker, an American who came to Paris and became famous as a singer and a cabaret performer. The trip was organized by my program and on Saturday night, my friends (Erin and Jeff) and I bought a big bottle of whiskey. This was a weekend where many of you were off at formals. Well, since I went away for a weekend, got drunk in a hotel room and smooched a boy, I’d say it was my own little formal. 😉

The next week, my mom came to visit me. We flew to Bremen, Germany, for the weekend, where my grandma’s two sisters and their families live. Has anyone heard of the story about the Bremen Musicians? Well, they’re from Bremen, Germany. I used to watch the movie when I was little, so I was excited to see them… ( http://en.wikipedia.org/wiki/Bremen_Town_Musicians) Dinner on Friday and Saturday night was ridiculously, stereotypically Russian. We had caviar and cow tongue and lots of fatty food. And my family forced me to take vodka shots. Also, my family owns a nightclub, along with some casinos, in Bremen, so on Saturday night I checked out “Russian night”. It was open bar for me, since I’m a member of the family, and some Russian guys hit on me. The “discotheque” stayed open until 6am and my mom found me the next morning, passed out in the bathroom. Oops. The other exciting thing was that my great-aunt’s house was ridiculous (I can’t think of another word, the whole weekend was just ridiculous) – inside, there was a pool, a sauna and a tanning bed!

My mom and I returned to Paris where we did touristy stuff. I finally visited Musee Rodin, which I really liked. It has different sculptures. My favorite is Le Baiser, (http://en.wikipedia.org/wiki/The_Kiss_(Rodin_sculpture)), which shows a couple intertwined… kissing. Maybe being in Paris for a semester has gotten to me?

The next weekend I went to Troyes, (pronounced twah), where my exboyfriend, who has been teaching English there for the past year, lives. It’s a really, really small town and it convinced me that pretty much all of France, other than the coast, and Paris, looks the same. It’s all country, with small towns, with wooden houses… and cathedrals that resemble Notre-Dame. 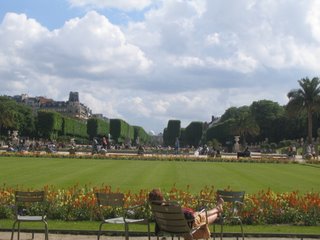 My ex-boyfriend came into Paris the next week for his birthday. I finally got to walk around the Luxembourg Gardens, which were beautiful! Probably my second favorite place in Paris, after the Eiffel Tower. We went to see The Da Vinci Code. (I thought it was okay, and it was really cool to be able to recognize a lot of the places in the film, but I didn’t like Tom Hanks. Also, they had French subtitles for the English parts, but no English subtitles for the French parts, which was interesting…)

Then, Ben, aka Baconstud, my best guy friend from Maryland came to visit. We did a lot of the touristy stuff again (Notre-Dame, Eiffel Tower). We also went to a bread festival that was going on, had a picnic in the park – bananas, nutella, wine, cheese and bread – , and I got to most of Musee D’Orsay, which has a lot of the famous impressionist paintings. Monet and Van Gogh are there. Ben’s friend took us to a vegetarian rally (I felt like such a fake). 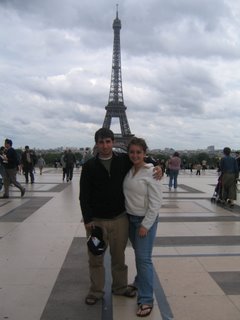 So, that about wraps it up for now. In between classes and visitors I’ve managed to go out almost every night. (Also, Jeff and I discovered after Spring Break that Highlander, one of our usual bars, will broadcast Red Sox games, which start at 1am our time, if we ask. Gotta get my Red Sox time in!)

I really am having the time of my life and it’s sad to see this coming to an end. I’ll save my reflections for after I leave Paris, next thursday. I’ll be back in the states on June 26th . I’m going to some Greek Islands, Prague and Amsterdam before I leave Europe. I’m planning a trip to College Park (maybe July 20th??), so let me know if you’ll be in town!

Congrats to all the graduates! Enjoy the beginning of your summers! Stay in touch!