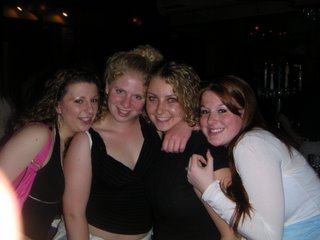 Before this whole changing program thing, Caitlin, Liz, Missy and I (that’s us on the left this summer at the Black Rose in Boston) were all planning to meet up in Athens, Greece on June 1st and take a 5:50pm Aegan Airlines flight from Athens to Corfu.

This would have been no problem since my program was scheduled to end May 19th and I planned to travel for a week in Spain before heading over to Greece.

Now, my program ends ON June 1st (the day we are all supposed to meet) so I have spent the last two days trying to find a flight that got to Athens in time for me to make the 5:50pm flight. There are two Olympic Airlines and Air France flights on June 1st, but they each arrive after 5:50. There is a flight from Paris to Athens that gets in at 5:25pm, but I know that there’s no way I would make the second flight. Then, there’s a flight from Milan (Malpensa) that departs at 12:45 and arrives at 4:15, but there’s no flight from Paris for me to make it to Milan in time. Trains from Paris to Milan take about six hours. There are flights with perfect timing, going from Paris to Athens, but they cost around $1500. I don’t really have that kind of money. Are you still with me?

Tonight I decided that I would get to Corfu from Paris on my own because it seems like there’s no way for me to make it to Athens in time to take the flight with all my friends. So I started researching and researching and researching. I was very excited when I finally found a flight leaving from Paris at 1:05pm, arriving in Corfu at 8:35pm, and only costing 178.60. What I didn’t factor in is that the price is in British Pounds and equals approxiametly $316. I knew that the two flights: Paris-Athens, Athens-Corfu on June 1st were my only option, so it would all come down to where I went to book my ticket. I’d like to display my findings below. (This is a list of TOTAL price, in dollars.)

I, personally, was surprised that expedia.com ended up having the lowerst fare. I wouldn’t have thought to check out their site except for the fact that it came up in my google search everytime. Which brings me to the real point of this post.

Today, at work, I was looking for all this flight information (let’s assume it was lunchtime). I don’t really remember what I googled but I imagine it included some combination of “go, fly, europe, cheap, travel”. I found a great, great, european travel search engine. It started with a K and was called something like Kanando or Kamazoo or Kanzono… you get the idea. It searched about 30 airlines for me. It was the most amazing thing ever! Now, the expedia fare is fine, and that’s what I’ll probably end up booking, but I have spent the past two hours triving to find that search engine with no success. Does anyone out there know the website I am refering to?

(One of my best friends from school is flying here tomorrow after her semester abroad so I’m taking a couple of days off of work and won’t be able to look through my history to see what the site was in time to book the ticket.)