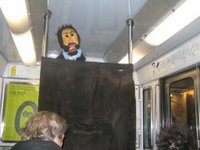 I spend a lot of time riding the metro, and I often see some strange things. There are the usual bums, the performers, and the general people riding the subway. I love getting on a train and hearing Russian. I am able to be invisible – I can listen in on the conversation without it ever being known. (It’s not that I particurarly care what is being said, but hearing my langue maternelle reminds me that I’m not SO far away).

Anyway, today, after class, on my way to McDonalds (where else), I sat next to young women with an unusual look. She had a buzz cut, except for several green braids that where randomly placed on her head. I didn’t really think anything of it… until a rat peeked out from under her hood. My initial reaction was to move away. She reassured me that it wouldn’t climb out, and out of politeness I stayed seated, but the guy sitting across from me could see that I was trying not to laugh. It was a little unnerving… but hey, it makes for a great story.