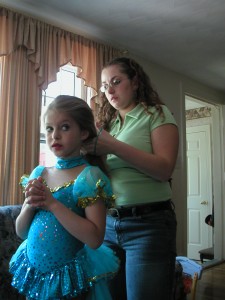 I received a phone call from my twelve-year-old sister yesterday, which is a big deal these days. (Since phone calls are so five years ago.) She called to tell me that she had been awarded an ice skating scholarship. That, in itself, is a huge deal and I’m so proud of her.

But she didn’t just call me to tell me the news; she called to thank me for my help… When I was home in January, she was struggling to effectively express why she was worthy of the honor and I worked with her to brainstorm her ideas and to present them in a cohesive manner.

(And trust me, she was pretty miserable while we were working on the essay because I would ask her “What is your thesis? What are the three points you are trying to make? Why are they a big deal? Stick to your argument and get rid of the unnecessary tangents.”)

Regular readers of this blog are aware that I often struggle with the guilt I feel living 440 miles away from my two younger sisters so I very much cherish those moments when I truly am able to fulfill the role of the guiding and supportive older sister.

When I decided to move down to DC I promised myself (as well as the roommates, friends, coworkers, and family I left behind in Boston) that I would 1. date and 2. take advantage of all the great things that DC has to offer from the ordinary to the obscure in the spirit of “do one thing daily that scares you”. Well, ladies and gentlemen, let me assure you that I have been fulfilling both those promises. But nothing goes as smoothly for me as it does for others. (Don’t I start every blog post this way?)

Anyway, for those of you keeping up, I wrote on Friday how impressed I have been with the manners of District residents. So  I thought it serendipitous when I came across the following tidbit on the DCist while doing my routine scanning of local events and news on Saturday morning:

>> From 3 to 5 p.m., check out the new Founding Farmers restaurant while enjoying a sure-to-be both funny and polite talk with Mind Your Manners!: George Washington’s Rules of Civility author James Henry. The book uses 110 maxims and illustrations to showcase our first president’s “rules of civility,” and the event will include light hors d’œuvres, a colonial drink special and discounted books.

The city seems to be abuzz with the newly opened Founding Farmers, so I figured at best I’d get to hear an interesting discussion and at worst I’d be able to try out the food.

Picture me, arriving at Founding Farmers (with an unsuspecting friend in tow) and awkwardly approaching the event – just a few people hanging out around a table. I was greeted by author James Henry himself, to whom I explained that I am a local DC blogger who covers being twentysomething and living in the District, and that I had heard about his event and was there to offer my support, learn about him and hear about the book. I thought that was pretty smooth until the event coordinators exclaimed how excited they to hear that I was from the DCist… So I clarified that I was an independent blogger who had read about the event on the DCist blog.

What happened next was an impromptu interview of sorts. (Once again, picture me, with no pad or pen, trying to act like I’ve come prepared with questions.) My findings: In his book, James Henry takes George Washington’s 110 Rules of Civilty and updates them for the current day. He believes that being rude and crass is en vogue and hopes that his book can help usher in an era of manners (or at least to remind us what we’ve lost).

There wasn’t much to be said after that (where was the “funny and polite talk” we were promised??) so my friend and I did in fact try the cuisine. The fried green tomatoes were delicious! And after a bit more standing around we graciously said our goodbyes (we were at a manners event, after all), wished James Henry best of luck and made our escape.

I hope you’ve felt as awkward reading this post as I felt during the event. For a much more eloquent write-up of the event, head over to Greg’s List – DC review.

Apparently, Charleston, South Carolina is known as the best-mannered city in the United States. But, if it were up to me, I would nominate Washington, DC for the title.

I don’t know whether there are just a lot of transplated southerners and aspiring politicians who have made their way to the District, but as a whole, I am repeatedly suprised by the the consideration I’ve received from strangers here – especially of the male gender.

The men here hold doors open, wait for you to walk in front of them… Someone even gave up his bus seat for me the other day!

At first I thought I had just stumbled into a few situations of gentlemanly behavior, but it seems this epidemic of politeness and refinement has spread throughout the city.

A girl sure can get used to this kind of treatment.