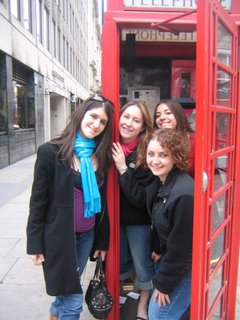 this weekend was spent in london with some of my best friends from maryland. Unfortunately, if I stay here to describe it, I will miss the metro home. Thank you, Paris.

So, last time I posted The Luckiest by Ben Folds, which as I said, I think is probably the most real, the most poignant love song out there. Well, It Ain’t Me, Babe by Bob Dylan is another one of my favorites, for the same reasons. The emotions in the words are what make the song. The sappiness will soon stop, I promise…

Happy Spring! So much has happened in the past three weeks… every day is a new adventure.

The trip to Normandie was a lot of fun. It actually reminded me more of Birthright than of a frat formal, though. We visited the Bayeux Tapestry, and several D-Day beaches. We also visited the American cemetery, a world war two museum and a farm, where got to buy some yummy jam and got to try Calvados, a really, really strong alcohol only made in Normandie. The american cemetery is a really powerful experience: white crosses (and stars of david) everywhere. From any perspective, it looks like the gravestones are aligned. Apparently, this is called “the last formation”. I went out with a couple of friends (big surprise?) in Normandie, while everyone else in a program decided to stay in. We found a random bowling alley, that also served as the town’s pool hall, pub, karoake bar and dance club. When we played pool, the balls where only red and yellow, and didn’t have any numbers (I’m told that that’s billiards?)

Lesley, one of my best friends from home, came to visit last week. It was amazing having a friend here and I finally got to do all that tourist stuff: going up the Arc de Triomphe, shopping on the Champs-Elysees, going up the Eiffel Tower…

On a different topic, as you may have heard on the news, Paris is in a little bit of political turmoil right now. If I can’t go to the riots, I guess they come to me! The french government passed the CPE which says that young people – those under 26 – can be fired, without any reason, for up to two years into their employment. Now, for Americans, that doesn’t seem to be a big deal because that’s the way it is in the US. However, in the US you can be fired for any reason, unless it’s discriminatory. This law is inherently discriminatory by targeting only those under 26. And it also means that people can be fired because of their skin color, their gender… you get the idea.

The Sorbonne has been closed for the past couple days. First there was a sit-in, which the police broke up, using force… then, the government decided to close the institute for reasons of security. Because I’m in the International Students department, I still have classes, but I haven’t given up hope that our teachers will go on strike, too. There have been a few demonstrations all around the city, and now they are saying that the government might actually amend or repeal the law. The students on the streets are gaining power!

I was in McDonalds last week… I turned and saw Deborah Wohls trying to figure out how to get to the Catacombs. And yesterday, I went to the Highlander, one of our usual bars, and saw a kid who I did a french immersion program with in Nova Scotia Summer 2001. Small world. I guess that doesn’t only happen in Israel, that you bump into the entire world!

Anyway, this weekend, I flew to Dublin to celebrate St. Patty’s day. I met up with Missy, who is studying in Florence. Friday night we went to a traditional Irish pub at Temple Bar (think Adams Morgan or Faneuil Hall). I discovered a downstairs with a dance club. At the end of the night, the club turned into a deaf club. It was definitely an interesting experience not being able to communicate with people there because they couldn’t hear me, not because they couldn’t understand my language. Good thing Missy knows American Sign Language. 🙂 Saturday, we went to the Guinness factory, where we stayed for five hours, “sampling” the beer. Apparently, it goes really well with oysters, but I just couldn’t bring myself to try them. Saturday night we went out to another traditional Irish pub (music and drunkies and all). Sunday, we had a quick tour of the rest of the city and then it was back to Paris.

Caitlin, another one of my best friends from home, was here this weekend and left yesterday. I took her to Queen which I would say is the most famous club in Paris. It’s a gay bar and it’s on the Champs-Elysees. Monday night, it’s disco night and straight night. We got to go into the VIP section! It was an experience, let me tell you!

So, now that I’ve bored you all thoroughly, it’s time for me to sign off. Thanks for the e-mails, I’m doing my best to answer them (have I mentioned how much it sucks not having internet!?!). Enjoy your spring breaks! Keep in touch!