Okay, the following is a (long) article from the Washington Post. This murder made the French news a couple of days ago, but I think it’s just now hitting the US papers. I do not believe that I am in any danger here, but things like this serve as a reminder that I’m “not in Kansas, anymore”.

Being Jewish hasn’t been an issue yet. I’ve met a lot of people, among them Arabs, and I sometimes wonder how they’d react if they knew I was Jewish, but, well… Also, at the beginning, I took off my Star of David necklace, and only wore the ring I bought in Jerusalem this summer with a Hebrew inscription on it (Remember the past, live in the present, and believe in the future), so at least I’d feel like I was defying the “rules” a little bit. Well, last weekend I hung out with Ben and Orli, who are both Jewish and Ben was wearing a gold Star of David necklace. He’s French, so I figure if he’s doing it, I’m okay to do the same. I opted to start wearing my Chamsa necklace (pictured on the left), which, just like my ring, is something that unless you were Jewish or had knowledge about the faith, wouldn’t mean anything to you. Something like a secret handshake, if you will.

The only thing that’s been hard is finding meat. I don’t eat pig. The French do. A lot. At my Franprix (like a Giant or a Stop and Shop) deli, they don’t even carry turkey. So that’s on my list of things to find!

So, last night, I was walking to Franprix after just having sent an email about the murder to my friends back home. I was deep in thought about being Jewish and being in Paris… when I saw a man walking with his son, who was wearing a kippah (headcovering) – not the kind you would picture – it was kind of like a hat, with a woven design. It was Friday night, so I got really excited and wished them a Shabbat Shalom. The man did a double take, probably didn’t know what to make of me since I was carry a workbag and obviously not on my way to the synagogue, and returned my salutation.

(Here in Europe, you’re either Orthodox or your not anything. Conservative or Reform Judaism don’t exist. So, it appears weird to a European that I would be wishing someone a Shabbat Shalom if I wasn’t planning on observing it.)

I don’t think I can put into words how that made feel. To know that I was still able to find someone here to wish a Good Shabbos made me feel right at home, and at peace.

PARIS, Feb. 24 — One day last month, a young woman entered the Paris mobile phone shop where Ilan Halimi worked. She had no interest in a new phone, according to Paris police. She wanted to flirt with the 23-year-old salesman. She left the shop with Halimi’s cell phone number, and soon after, the two arranged a date.

Last week, French police found Halimi — the son of Jewish Moroccan immigrants — near a railroad track in a southern Parisian suburb. His naked body was covered with cigarette burns and he was handcuffed. He died in an ambulance on the way to the hospital.

French police initially described the brutal kidnapping and killing as a crime-for-cash perpetrated by a gang calling itself “The Barbarians.” It routinely used young women to lure unsuspecting victims.

But in ensuing days, family members, Jewish organizations and a French magistrate labeled the killing a hate crime, directed against Halimi because of his religion. Many have cited the torture and reports that the gang’s suspected leader was later arrested in a Muslim neighborhood in Ivory Coast, in West Africa.

In a country that experienced a surge in anti-Semitic attacks, most of them blamed on Muslims, in the first years of the current Palestinian uprising against Israel, top politicians have rallied to publicly condemn the crime. Dozens of national leaders, including President Jacques Chirac, crowded into a memorial service for Halimi at a Paris synagogue Thursday night.

“The truth is that these hoodlums first of all acted for villainous and sordid reasons — money,” Interior Minister Nicolas Sarkozy told French legislators this week. “But they had the belief, and I quote, that ‘Jews have money,’ ” he said, referring to police interrogations of two people accused of involvement in the kidnapping.

The crime has incited outrage among Jews across France. Many fear that animosities simmering below the surface of a divided French society could easily reignite. There are about 6 million Muslims in France and 600,000 Jews.

“Ilan’s death may be an isolated action, but it is also a wake-up call,” said Sarah Aizenman, a representative of the French Union of Jewish Students. She said anti-Semitic crime has declined in France in recent months but threatens to rise again.

“The engine wasn’t anti-Semitism, but the fuel certainly was,” said Michel Wieviorka, author of the recent book “The Anti-Semitic Temptation: The Hatred of Jews in Today’s France.”
“It was based on the idea that the Jews are wealthy, and that if the boy doesn’t pay, the community will,” Wieviorka said.

Ruth Halimi, the victim’s mother, told the Israeli newspaper Haaretz, “If Ilan hadn’t been Jewish he wouldn’t have been murdered.”

She said she last saw her son alive on Friday, Jan. 20, as he was leaving for a date with the woman who had come into his shop. “On Saturday night, he called and said he had been kidnapped and asked us to check our e-mail,” Halimi said. A message there included a photograph of Ilan, blindfolded and with a gun pointed at his head. The text read, “450,000 euros or call the funeral home,” she said. That sum is equal to about $540,000.

Over the next three weeks, the kidnappers negotiated with Ilan’s family members. Halimi told Haaretz that on instructions from the police, the family stopped answering telephone calls and text messages from the kidnappers in order to force them to use e-mail that might be tracked to Internet cafes from which they transmitted messages. The ransom demand eventually dropped to 5,000 euros, or about $6,000, French newspapers have reported. It is unclear what ultimately prompted the kidnappers to dump their dying captive.

The suspected gang leader, Youssouf Fofana, 26, fled France and was arrested Wednesday in Ivory Coast. Police have detained 16 other people for questioning in connection with the case.

The members of the group have a variety of ethnic and religious backgrounds, French police said. But most appear to be residents of the same low-income housing project in the suburb of Bagneux, southwest of Paris.

A rash of arson incidents and clashes with police erupted across the Paris suburbs last fall, spreading to virtually every town in France. Much of France’s immigrant populations and their children live in suburban housing built by the government.

With high unemployment and crime and substandard living conditions, the youth populating the suburbs have become increasingly angry. Although last fall’s violence had no overt religious overtones, many of the rebellious youth were Muslims.

French officials and Jewish leaders have been hesitant to allege that the killing was solely an act of anti-Semitism. “The question is, what kind of anti-Semitism are we talking about?” said Michel Serfaty, a rabbi at the synagogue in the Paris suburb of Ris-Orangis and an activist promoting Jewish-Muslim dialogue.

“It’s a combination of gangsterism, villainy and old cliches where Jews mean money,” Serfaty said. “It’s young people of all origins in the suburbs expressing their resentment: ‘The Jews are rich and they don’t share it with us. They’re smart and we don’t have jobs. They dominate the world and we have no power.’ ”

Emmanuel Weintraub, an official of the Representative Council of French Jewish Institutions, said the case reflects deeper troubles in French society. “There’s something striking about this gang,” he said. “It’s a pretty big cross section of our multiethnic society. It’s the story of a group of friends who went too far. It shows a far-reaching phenomenon of social decay.” 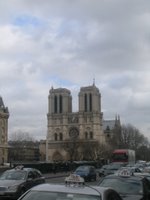 The view from the Metro stop I take to school (pictured to the right) is no more. No, Notre-Dame has not collapsed or been destroyed or anything like that. Simply, I’ve switched my French Grammar Course from Intermediare 1 to Superieur 3 (Intermediate to Advanced), and now my class is in a different location.

I’m sad though, to leave this majestic view, which I had gotten used to welcoming me to my class… 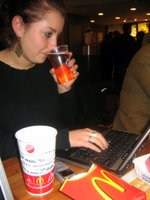 Remember that time I ordered a beer at McDonalds? (Okay, okay, so I did it at when I was fifteen at the Champs-Elysees McDonalds, but it was just as fun this time!)

Other things of note about French McDonalds:

this list will be continued as I remember stuff….